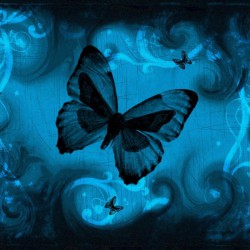 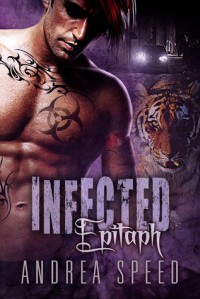 I love this series, the world that Andrea Speed has created, and this book was a fitting finale. It wasn't perfect but I enjoyed where she left Roan and the hope for the future not matter how long or short.

I like the stories, the stolen blood, definitely something I couldn't believe hadn't come up before in this series

All through the series we have seen Roan struggling with accepting himself and while testing the boundaries and at times not liking himself very much. This was the first book that I felt Roan didn't look at himself as the freak, he cracked jokes about this batman status and he accepted what he was and stopped with the self pity to a degree.

Doctor Rosenberg was a great character through out the series, her foul mouth was at times hilarious. But underneath she cared greatly for Roan and this was shown many times through out the books. The ability she had to turn Roan into a lab rat but protected him and tried to help him because she saw the person not the infection. I'm glad Roan listened to her finally and that she was able to give him some hope of controlling the lion.

Holden has also been a favourite of mine, and whilst I love the prickly smart mouth, he annoyed me at the end of this book. The cavalier attitude of "if I go in there, Roan will come for me" especially after witnessing how much damage the transformations were hurting Roan was selfish and cruel. I have heard that there will be a spin off series with Holden and I hope we get a resolution to his and Scott's relationship. I'll definitely be reading it

The Hockey guys all appeared and I still love each and everyone of them. No matter where they are, they all support each other like true friends. At the start of the series Roan had a small friend base and it has been great to see Roan adding to his family, each one of them looneys in their own way, but each with a heart of gold.

In this book it felt like Roan had let go of Paris a bit, where before he was unwilling to remove anything from his life that had memories he was now letting go,without to much of a fight, and after going through his grief with him for so many books it just didn't ring true, but I'm glad for Dylan's sake.

Dylan, Dylan, Dylan the land of denial is never a good place to be, but that is where he decided to stay, which was disappointing. I know he was the clam grounding point but I really wished he would get his head out the sand and grow some balls.

As a little side note, while reading this series, I was also thinking about my other favourite paranormal series Psycop series and the parallels between them which made me realise why both of these series were favourites. Both main characters were born with their powers, although both were considered to be great by some, prejudice and pain also came with which led to both characters self medicated to get through each day often to the point of overdosing, only their high tolerance saved them, highlighting how truly un great it was to be these people.

This world Andrea created was fantasy but also had great snippets of human nature. I mean with all of the pain involved with transitioning (which was refreshing to see) and the shortened life span, who in their right mind would want to be infected. But basic human nature shows that there are idiots out there who would do anything to become infected.